Nigeria, on the Atlantic coast of West Africa, is one of Africa’s largest economies. Yet almost half the population lives below the poverty line. The country has been heavily exposed to conflicts, such as the Biafra War in the 1960s and in the 2010s the terrorist group Boko Haram and other internal battles. Children are hard hit by crises and conflicts and girls have been particularly vulnerable to terrorist attacks.

The country has been plagued by conflicts since the 1960s, when one million people were killed in the Biafra War. Now in the early 2000s, human security and the country’s stability are threatened by the Boko Haram terrorist group and conflicts between farmers and herders.

Oil is a major asset to the country’s economy. But due to, among other things, corruption and the fact that many support themselves on agriculture, it has not improved the situation for the population as a whole. There are differences between the northern and southern parts of the country but almost half of all Nigerians live in poverty.

In Nigeria, healthcare is generally poor and maternal and infant mortality rates are among the highest in the world. In addition, many children do not have access to good education. Literacy in the country is low. The school and health care have also suffered from Boko Haram’s progress, the terrorist group has burned down both schools and health clinics in several areas.

Attacks on girls and girls’ education

During the 2010s, children have been hit extremely hard by Boko Haram’s terror in northeastern Nigeria. Hundreds of girls have been abducted from their schools. Most have been released but some girls lost their lives. In total, they are said to have abducted thousands of girls and women.

Boko Haram has attacked, bombed and burned down more than 1,000 schools in northeastern Nigeria. Several schools are closed and over 600 teachers have been murdered. Many families take their children out of school due to the high risk of kidnapping and attacks, and especially girls’ schooling has decreased. 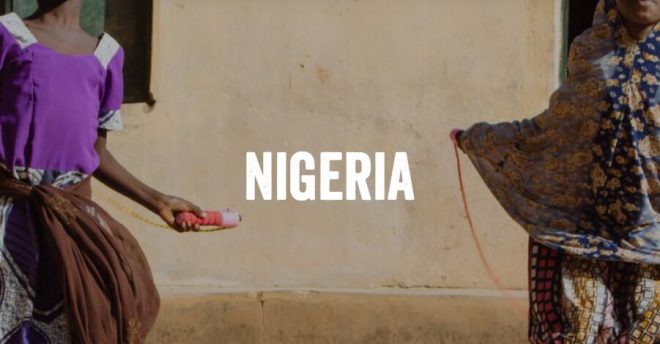 This makes plan international in Nigeria

Plan International has been in Nigeria since 2014 to support refugee children and families in their own country. In addition to humanitarian support, we also focus on education, health and children’s participation. For example, our work may involve giving the most vulnerable families money to buy food. The work in refugee camps focuses especially on our so-called safe places that give children the opportunity for play, education and psychosocial support. Outside the camps, we focus, among other things, on building temporary schools. We are working to influence the Nigerian government to ensure that children who have been forced to leave school due to the conflict have access to education.

The proportion of girls in school decreases as the children get older. Plan International works for increased access to sanitary napkins and separate toilets for girls, which has proven to work to get more girls in their early teens to stay in school. We also work to change attitudes about girls’ schooling. We focus on the rights of teenage girls by offering children and young people sex and cohabitation education and strengthening the protection of teenage girls against gender-based violence and their opportunities to participate in society. We support girls who have been subjected to Boko Haram violence with psychosocial support and health care.

Plan International has a series of reports on the situation of teenage girls in humanitarian crises . One of the reports is about teenage girls living in the areas where the terrorist group Boko Haram has been present . They say that they are exposed to serious violence by men and boys in their vicinity, often the abuse takes place at home or on the way to school. Several of the interviewees say that the protracted crisis has led to them being forced into prostitution in order to obtain supplies such as food, money, clothes or school supplies. Many also report that they or someone close to them has been raped. Because there is a great stigma surrounding sexual violence, in some cases girls are also forced to marry a man who has raped them.

The future is bright for Bright

All children have the right to development and to influence their own future. In Nigeria, many children, especially girls, are denied this opportunity. For 16-year-old Bright, the contact with Plan International became a step on the way to realizing his writing dreams.

The program that Plan International works with builds young people’s self-confidence by, among other things, strengthening their communication skills and giving them vocational guidance. The purpose of the program is for the young people themselves to become active in the change required to achieve a more equal society in Nigeria. One of the participants is 16-year-old Bright, who through the program BLOOM + (Better Life Options and Opportunities Model) has had the opportunity to realize his dream of becoming a writer.

– Our course leader has taught us to set goals in life and it made me think of my dream of writing books, she says.

Bright lost his parents at the age of six and has since lived with his aunt and cousins. Losing her parents at such an early age has made Bright lonely and vulnerable, which has often created conflicts between her and her aunt, who herself has four children to take care of.

Bright has recently started writing her book after her classmates and course leaders teased her.

– The book is aimed at all young girls who are discovering themselves or who may think they are useless. I want to know that there is a future even for them if they work hard and do not lose hope.

Our hope is to reach 154,000 children in Northeastern Nigeria with good education in a safe environment before the end of the year

We have almost no opportunities to make any money and at the same time increase the cost of food. All the years of violence and insecurity have meant that we will soon not be able to do more

A mother talks about the difficulties her family faces. About 40 children between the ages of six months and five years are diagnosed every day as malnourished in Nigeria.